You are here: Home › The Tower at PNC Plaza: A Workplace for the Future
Posted by Angelica Ciranni on September 30, 2016 in Green Project Profiles, LEED, The Latest

Over the last decade, The Tower at PNC Plaza has been one of the Pittsburgh region’s most anticipated developments, but its origins stretch back to the late 1990s when The PNC Financial Services started its green building journey. In 2000, PNC opened PNC Firstside Center, then the largest LEED certified building in the world. Later, in 2003, PNC made the industry-leading commitment to certify all new construction and major renovations under the LEED green building rating system. With the Tower, PNC combined more than 15 years of experience and made a bold statement through its new corporate headquarters in Downtown Pittsburgh. Below is an interview with PNC’s sustainability analyst, Angelica Ciranni about the project.

How did PNC Financial Services decide to make the Tower at PNC Plaza the greenest office tower in the world? Why was that important?

PNC’s goal was to build the greenest office tower in the world while bringing our employees into a more centralized location. We’ve always been committed to the health and productivity of our employees and have had great success in pursuing green buildings, especially in terms of how they’ve positively affected our employees. However, the most important piece was ensuring that the Tower at PNC Plaza incorporated our key learnings over the past 15 years to become the crown jewel of our green buildings. 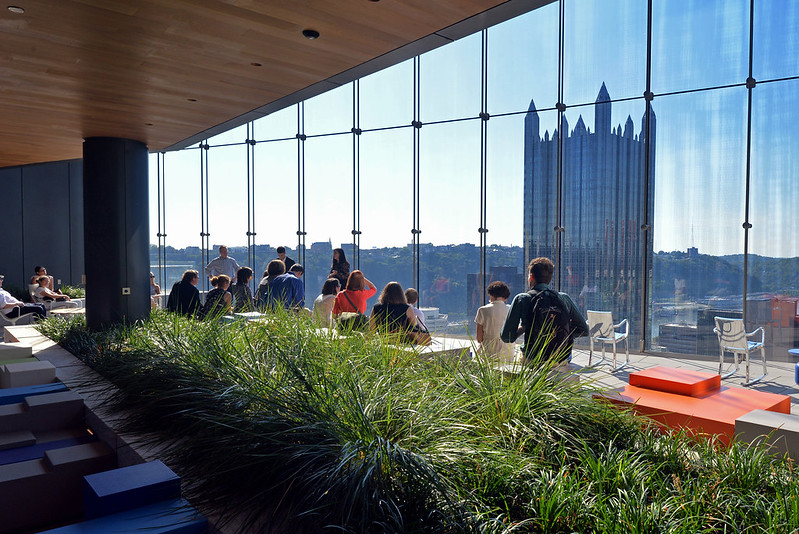 From the beginning, what were the Tower at PNC Plaza’s priorities?

Since the very beginning of this project, we kept our eyes on “three pillars.” The first was “energy responder,” as we wanted to use passive strategies as much as possible and ultimately implemented the double-skin façade, as well as a lot of daylighting.

There’s also the “community builder” pillar. PNC has always been committed to strengthening the communities it serves. We’ve noticed with developments like The Tower at PNC Plaza, 500 Smithfield, and Three PNC Plaza that our investments tend to have a domino effect – they spur other construction or renovation projects nearby.

The final pillar is “workplace innovator.” We wanted the Tower to be a showcase for how we envision PNC working in the future – and how our workplace will evolve. For example, we have two-story neighborhoods that share amenities and encourage collaboration between different staff functions or lines of business.  Also, our workstation walls are low, which not only allows more light to enter employees’ spaces, but also facilitates teamwork and idea sharing.

Everyone has a desk but still has the ability to pick up and go to wherever they need.  That’s something we’re going to continue to build on in new and renovated spaces, as we’ve seen how successful this approach can be in terms of supporting employee engagement and collaboration.

What were some of the project’s constraints?

Budget, of course! Every decision and investment has to make sense from a business or financial perspective. How can we ensure that we’re getting a payback period that is within an acceptable range?

While we looked at tapping the aquifer Downtown, the geology below our site wasn’t appropriate. We also looked into renewable energy, but for a building this tall and with such a small footprint, it didn’t make financial sense. Fortunately, we realized that we could gain many of the same energy benefits through the use of a solar collector to support our natural ventilation and mechanical systems.

When you opened your doors in October 2015, you already had the LEED Platinum plaque. What did it take to make that happen?

Having a LEED plaque on opening day was important to us because we value that third-party quality control check of our work. We had been providing LEED documentation to the U.S. Green Building Council for years – and because our sustainability consultant is so experienced with LEED, we have a very strong understanding of what is needed and how we can properly address different LEED requirements. It certainly necessitated many people and a lot of work to make LEED Platinum happen by Day 1, but our project team came together and did just that.

What components or systems are you really proud of or excited about?

The double-skin façade is incredible. People love seeing the building respond to its environment. It gets people talking about what we are doing and why it was such an important component to our green building strategy. In a lot of ways, what we do is invisible. There are systems behind walls or in mechanical rooms where no one ever goes. The fact that the double-skin façade is front and center for our employees (as well as others in the city) gets people talking.

Of course, our façade also offers a lot of value in terms of sustainability. Specifically, there are three modes through which it assists with heating and cooling. When we’re in natural ventilation mode, exterior walls and interior vents are open — and air flows across the floor and out into the solar chimney before escaping at the roof.  The system is controlled by our building automation system, which is basically the “brains” of the building, and looks at temperature, humidity, precipitation, and wind speed. In addition, we’re constantly gathering data about pollen and other air quality indicators, such as particulate matter.  If we have an air quality action day, we don’t want to bring that air inside. Pittsburgh’s air quality is best in the spring and fall, when we expect to use natural ventilation most.

There are two other ways we use double-skin façade. During the winter, the double-skin façade creates an insulating layer to help keep the workspace warm. In the summer, the interior vents remain closed, while the exterior ones open. That allows for air flow within the cavity, keeping it cool.

Also, we have “good day” indicators along the perimeter of each floor. When these turn green, they signal that we are in natural ventilation mode and can open the doors. Everyone gets excited when the green light turns on, as people like to open the doors and allow fresh air into their workspaces.

Any other cool building systems you’d like to mention?

In the winter, we use radiant panels to provide heat in our workspaces. Warm water flows through these panels, giving off heat throughout the building. Because water is about 30 times more efficient at transferring heat than air, we can warm water to a lower temperature, which saves considerable energy. Similarly, for cooling we have a chilled beam system. Water flows through its beams and cools fresh air, using less energy than a typical mechanical system.

How is PNC’s organizational culture changing and acclimating in the Tower at PNC Plaza?

We implemented a Green Ambassador program to make the transition as smooth as possible. We asked for volunteers who were really interested in the building’s sustainability components to help us get the message out about how the building works and how employees can be most productive and happy in their spaces. The number of people who volunteered for this program speaks to their interest – 140 employees are involved!

While I can’t say that people are really fascinated by the automated blinds and LED lighting, I think they are excited about PNC’s commitment to green building and innovation, and feel a sense of pride in our leadership.  They also love the natural light and the fact that you can open the double-skin façade’s doors. And the 28th floor has an incredibly beautiful indoor park with five stories of glass that look out onto Market Square.  You can take your laptop up there to do work or simply meet a friend there for lunch. This sense of “desk mobility” has done a lot in terms of increasing engagement and morale and allowing for more cross-functional collaboration.

How does the Tower at PNC Plaza reflect PNC’s larger culture and values?

One of the coolest things about the Tower at PNC Plaza, in my opinion, is its transparency.  You can actually see what’s happening in our building, which was intentional. If you look at One PNC Plaza, the windows are dark, so there’s a real contrast between what we did there in the 1970s and what we did here in 2015. Most importantly, this design demonstrates our desire to show that we are a transparent, innovative, and future-thinking company.

Angelica manages the Pittsburgh 2030 District, including the convening of District Partners, serving as the initiative’s primary spokesperson, and acting as the liaison between GBA and District stakeholders. She is a LEED AP O+M and holds a B.S. in Civil and Environmental Engineering from the University of Pittsburgh.
View all posts by Angelica Ciranni →

One Response to The Tower at PNC Plaza: A Workplace for the Future