The Pittsburgh 2030 District has expanded its boundary – for the 3rd time in as many years – into the Northside. The District, already the largest among 13 participating cities in North America, continues to grow at a record pace. In 2016 alone, the Pittsburgh 2030 District has gained commitments from 41 buildings representing 8 million square feet via agreements with 14 new property partners.

We are thrilled to pair this announcement with the commitment of Point State Park by Pennsylvania Department of Conservation and Natural Resources (DCNR) Secretary Cindy Adams Dunn. 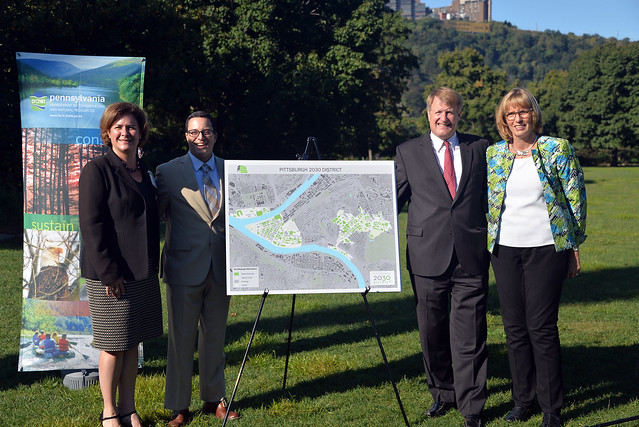 In total, 98 Property Partners and 481 buildings, facilities, and spaces – totaling 76.3 million square feet – have pledged to reduce their energy use, water consumption, and transportation emissions by 50% below baselines by the year 2030. That means that among Downtown, Oakland, and the Northside, 70.2% of available square footage is committed to the District, which surpasses both local goals and national milestones for the city.

What does this updated boundary look like? In the Northside, 5 Property Partners have committed 23 buildings totaling 6+ million square feet in 6 neighborhoods: Allegheny Center, Allegheny West, Central Northside, Chateau, East Allegheny, and North Shore. Commercial businesses within the District are welcome to join at any time, and the Pittsburgh 2030 District is actively recruiting new partners every day.

The new Property Partners specific to the Northside are:

Additionally, Pennsylvania Environmental Council and SmartPower have signed on as Community Partners.

“We believe the time is right to reach more buildings and businesses in the Northside,” said Anna J. Siefken, Vice President of Strategic Engagement and Pittsburgh 2030 District Director at Green Building Alliance. “There is renewed enthusiasm and building activity throughout the central Northside business district and its neighboring commercially oriented streets. This momentum represents a unique and tremendous opportunity to continue to rebuild the city of Pittsburgh in an economically viable, sustainable, and thoughtful way.”

That momentum spreads beyond this latest expansion. Since the beginning of 2016, the District has gained 14 new Property Partners who have committed more than 8 million square feet of commercial space.

Point State Park has joined Pittsburgh 2030 District as a solid and visible demonstration of DCNR’s strong commitment across their entire portfolio, commonwealth-wide. DCNR Secretary Cindy Adams Dunn noted that the Point’s enrollment in the Pittsburgh 2030 District pushes the state park and its staff to go beyond energy and water conservation efforts already in place, such as LED lighting at the fountain and across the park, low-flow and no-flow fixtures, and landscaping that controls stormwater runoff.

“Today, we add a new chapter as Point State Park becomes part of the ‘sustainability story’ in Pittsburgh,” said Dunn. “As a member of the Pittsburgh 2030 District, DCNR looks forward to taking on this challenge by working to reduce our energy and water consumption, promoting efficiency in our operations, and sharing what we have learned with others. At this park, and across our agency, we re-commit ourselves today to the conservation legacy that has been forged in our Commonwealth and we look forward to writing this next chapter with each of you.”

Earlier this year, the Pittsburgh 2030 District announced that it exceeded all of its 2015 reduction targets – energy, water, and transportation emissions. Total energy and water consumption reduced by 12.5 percent and 10.3 percent, respectively, surpassing its 2015 goal of 10 percent. Transportation emissions reduced by 24.2 percent, exceeding its 2030 goal of a 20 percent reduction – five years early. The District, which collects and aggregates actual performance data from committed buildings within its two District boundaries, is the largest of 13 internationally recognized 2030 District cities.