You are here: Home › Living Building Challenge: Project Updates
Posted by Mary Schrag on August 29, 2016 in Events, Projects, The Latest

Created by the International Living Future Institute (ILFI), the Living Building Challenge (LBC) is a holistic and incredibly rigorous building certification – so rigorous, in fact, that only 11 buildings in the world have achieved full LBC certification. One of those buildings is right here in Pittsburgh: the Center for Sustainable Landscapes (CSL) at Phipps Conservatory and Botanical Gardens. Not only that, but a hefty handful of other Pittsburgh projects are pursuing various levels of certification, continuing our region’s tradition as a leader in healthy and high-performing buildings.

In anticipation for the ILFI’s second annual Living Product Expo (which will be hosted in Pittsburgh!), we gathered recently at Phipps’ Center for Sustainable Landscapes to learn more about ILFI’s Living Building Certification. During the event, three experts shared about the LBC projects with which they are involved, and provided insights into the challenges, considerations, and successes that pursuing LBC can bring. 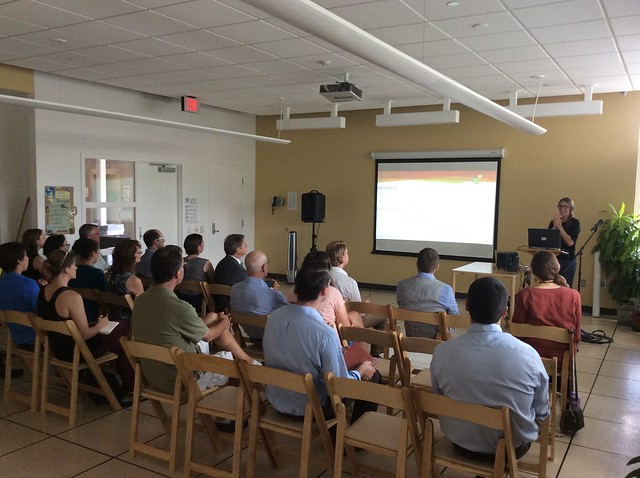 Before we heard about specific projects, Noah Shaltes from PJ Dick gave us an overview of the Living Building Challenge. LBC is a certification which provides a framework for creating projects that are truly sustainable rather than just being “less bad” than other buildings. Noah explained that one way development projects can do this is by taking cues from nature. For the LBC, the cue from nature is flowers. The project foci come in the form of seven petals: place, water, energy, health and happiness, materials, equity, and beauty. Each petal is broken into different imperatives that buildings must meet to become certified, and there are three paths for certification—these include full, petal, and net zero certification. Regardless of how the project is categorized, the credits for certification are mandatory and certification is based on actual building performance. This certification is rigorous and can be difficult to attain, and each of our presenters had some great insights into what it is like to work toward Living Building Certification.

After describing the structure of LBC, Noah shared about the project that he has been building—the Frick Environmental Center. The new center, located in the northwest corner of the 644-acre Frick Park, will include three levels: an upper, public level with restrooms and a reading and living room, a middle level with office space for Pittsburgh Parks Conservancy, and a mechanical space in the basement. PJ Dick, Noah’s company, has been working with this project from the beginning. Pursuing LBC means that the process looks different than most development projects’ processes. A much higher percentage of time and effort go into building design, and every element of the process is carefully considered. For example, the site is on a watershed divide, so water strategies for the north and south are different. Solar panels are canopied over parking spaces so the building can produce its own energy. There are geothermal wells under the sidewalk, again, to produce energy. Windows are manually operable for natural ventilation and so building occupants remember to be present. Drip piping was installed so trees can be preserved from black water that would otherwise saturate their root structures. At every step of the project, the elements had to be intentionally designed. Noah explained that the process is not about complying or completing point requirements. Rather, it is about changing how we think about creating buildings. This means that any challenge that comes up must be addressed. Tackling challenges can take more time and be difficult, but the result is projects that are integrated into their surroundings rather than working against them. Those working on the Frick project have taken the time to face the challenges with which they have been met, but it has paid off—the project is nearing completion and is engineered to achieve LBC and LEED Platinum certifications.

Our second presenter, Elisa Beck of Schwartz Living Market, chose with her team to work towards the materials petal of LBC for their project, which was registered in 2010. Schwartz Living Market is located in the historic section of South Side, in a building owned by Elisa’s husband’s family. Elisa explained that they chose the materials petal because what is on the inside of our products ends up affecting the quality of our lives. She introduced attendees to the Red List, a list of materials and chemicals that are not allowed in LBC projects because they are toxic to people and the environment. The project is a retrofit, so before installing their non-red list materials, the asbestos and drop ceiling were removed. The team wrote to companies and investigated each material they used in order to be sure that there were no Red List chemicals coming into their building. Elisa noted that when they started the project, there were very few companies that knew what was in their products. Therefore, something like Schwartz’s FSC-certified wood floor was difficult to find. There was a learning curve for nearly everyone involved, Elisa mentioned, and education has proven to be an important piece of the process. Today, they continue that education with their customers by teaching them about plants and other foods that are sold in the market.

We rounded out our presentations with Richard Piacentini and Jason Wirick of Phipps’ Center for Sustainable Landscapes. The CSL has been built and operating for several years, so Richard and Jason’s update was helpful for learning about the whole process and building performance of an LBC building. Richard began by echoing Elisa’s presentation in saying that the materials petal is the most difficult one, partially because it is challenging to find building materials that are free of toxic chemicals. He noted that Phipps’ staff liked that LBC was a certification that works with nature and systems-thinking, and that the CSL project team focused on the intersections between health, planet, and beauty in their building process. The team also used integrative design, meaning that all organizations working on the project collaborated on the design process—another example of the attentiveness to design that LBC requires. Some design elements include: rainwater storage, five rain gardens, a closed-loop water system, and lots of biophilic elements. Richard also mentioned the other phases of the project—the completed SEED classroom (which is designed to meet LBC standards),  and an upcoming exhibit staging center.

Jason followed Richard with some performance metrics from the CSL. He explained that like Frick, the CSL was designed to be net-zero. However, for the past three years, it has been a net-positive building; it generates more energy than it uses. As they gain more experience with the building, they are learning about it and are better able to adjust to increase their energy production and reduce energy usage. Students at CMU and the University of Pittsburgh are studying various aspects of this building, and their findings have provided insight for Phipps’ staff. Jason noted that what they have learned about the CSL will be applied in various ways throughout Phipps.

We concluded our event with a tour of the CSL, led by Richard and Jason. It was great to learn more in-depth information on all three of these exciting projects, paired with the opportunity to get a private tour of one of the world’s only Living Buildings! Each of the projects we heard about is at a different stage in its development, but it is clear that at any level, Living Building Challenge is an aptly named certification. Whether they are works-in-progress, nearly completed, or old hat, these buildings have been designed for interaction with the people and environments around them. They are living buildings—buildings designed from nature and for life, buildings designed with health and high performance in mind.

**The LBC Project Update was a ramp-up event for the second annual ILFI Living Product Expo, which is being held September 13-15 at the David L. Lawrence Convention Center in Pittsburgh. This conference and expo provides an opportunity to share and discover disruptive new ideas and technologies that are reshaping the materials landscape, accelerating the pace of innovation in the built environment and beyond. You can learn more and register for the conference here, or attend the Opening Night Keynote as part of the Inspire Speakers Series. And be sure to check out GBA’s Emerald Evening Gala directly following the conference on Thursday, September 15 from 5-9 p.m.

Mary Schrag, a native of Moundridge, KS, graduated from Bluffton University with a degree in Biblical and Theological Studies. While at Bluffton, Mary was active in the Honors Program and Chapel Planning Committee. She won Third Place Bi-Nationally in the C. Henry Smith Peace Oratorical Contest. Mary is also a traveler, having studied abroad in Guatemala and in Trinidad & Tobago. While in Guatemala, Mary pursued her passion for women’s rights by serving with ANADESA, a community development organization and women’s cooperative.
View all posts by Mary Schrag →