You are here: Home › From Gloom and Doom to Hope and (Climate) Change
Posted by Stephanie Sikora on May 22, 2016 in Inspire Speakers Series, The Latest

The Inspire Speakers Series season finale exemplified the goal of the entire program – to share, engage, connect, and inspire action.

Internationally acclaimed environmentalist, author, and sustainability pioneer Paul Hawken, along with Dr. Joylette Portlock, president of Pittsburgh nonprofit Communitopia, delivered motivating, science-based, solution-focused inspiration to a sold-out audience of more than 200 people last week. Their combined overall message was clear and powerful – we need to transform and grow the climate change conversation in a way that is positive and encouraging, and we must identify solutions and work together to produce results. 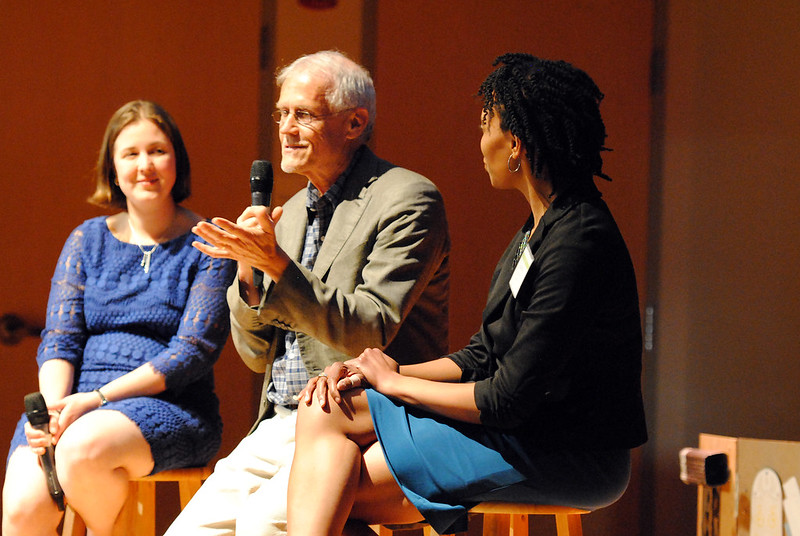 She is concerned that a massive amount of misinformation is given to the public, which creates controversy about the science of climate change. Science says climate change is man-made, but polls show that people think differently. Why aren’t we having fruitful conversations on the topic? Joylette suggests it’s due to the way they’re framed. Studies show that 2015 was the hottest year on record, and 2016 is shaping up to take its place. This has caused droughts, wildfires, and storm systems, not to mention melting ice caps raising ocean levels. The information people receive is all bad news; it’s all about the negative effects of climate change and about what may happen if something’s not done. Instead, she suggests we talk more optimistically and change the subject from one that’s depressing, overwhelming, isolating, and controversial to one that’s more digestible, hopeful, and positive.

Communitopia makes an effort to do just that in two ways:

She ended with her overall sentiment: Each of us can be a source of correct, encouraging information; start the conversation, talk to people about it. Don’t just sit there. Do something.

Paul Hawken’s much-anticipated presentation mirrored Portluck’s message, but took it a step further. Beyond changing and growing the conversation, he offered real solutions to climate change. In fact, he plans to offer 100 of them…

Introduced as “the bedrock of what we’re doing in this country for sustainability,” he boldly asked how many people in the audience didn’t believe in climate science. He urged, “It’s okay, raise your hands, no one’s going to judge you.” Still, no one raised their hands. Turns out, it was a trick question. We all should have raised our hands, he said, because it’s not about belief, it’s about science.

Nonetheless, facts do not trump beliefs – beliefs trump facts. If you lead with facts, you’re not necessarily going to change people’s minds. So, how do we communicate then? The current communication strategy around climate change is a demonstrated failure. Distance, doom, and denial guarantee that people will be – and are – turned off, go numb, act like it’s not even there. Press coverage is really daunting, but it feels very distant, like it doesn’t affect us. Instead of forcing on us the reasons why climate change is so bad, Paul’s latest project is about something very different.

After his own experiences feeling depressed and negative when reading climate science research, he had a very simple question of his own – can we just make a list of what we can do now and then measure out its impact? For years, he asked people to do it, but no one did. So he took the project into his own hands and Project Drawdown was born, producing:

The 100 most substantive solutions to climate change.

“Drawdown” is when greenhouse gases go down on a year-to-year basis. Achieving drawdown is “the only solution that makes sense,” he said. But it’s opposite of the current social perspective.

Seventy-five researchers from 25 countries are doing the core research to present 100 solutions to achieve drawdown in the next 30 years. Anticipated to be completed and released in spring 2017, the solutions will be ranked in order of impact, as well as by sector and collated by agency, making their end results understandable. Paul and his team do the calculations that matter. “The math has been done on what’s going to happen if we don’t act,” he said. “We do the math on the solutions.”

Among the top 20 solutions, 10 of them involve land use and food; another 20 of the solutions are “coming attractions,” things already in place that are making an impact for the better or have the potential to do so. The project is also creating a Carbon Council, comprised of companies and organizations committed to reducing climate change. From renewable energy to land use to educating girls in other countries, possibly the greatest part about the project is that it produces 100 “no-regrets solutions.” Paul projects, “There is not one thing on the list that we wouldn’t want to do if climate change did not exist. Every one makes a better world, a healthier and kinder world, a more resilient agricultural system, more jobs, more prosperity and security.

“Doing less harm doesn’t work for us anymore. Slowing down the approach to the cliff isn’t it. We have to redo the model.”

That’s exactly what Project Drawdown is doing. It’s also trying to change the way we communicate about climate change. Instead of demonizing and blaming others about what’s happening TO all of us, it encourages and enables us to take responsibility and do what we’re capable of doing together. That’s the story we’re not hearing. It’s the story we have to tell. Transformation is the story of climate change.

“Climate change is the gift to tell us now is the time to transform everything we do. And we can do that… What Drawdown’s about is to show that we can achieve drawdown. We’ve done the math. We could achieve it within 30 years. So let’s do it. Climate change is telling us that our survival, our children’s future, depends on all of us, each of us together. There are no heroes here to lead the way. This is a ‘we’ proposition.”

Both Joy’s and Paul’s presentations conveyed the same messages – start the conversation, be more positive and hopeful, identify solutions, and actually DO something to achieve the goal. Change gloom and doom to hope and opportunity.

Stephanie shares stories, successes, inspiration, and lessons learned from across the region as they relate to the creation of healthy and high-performing buildings.
View all posts by Stephanie Sikora →