In September 2016, the reimagined and rebuilt Frick Environmental Center opened its doors to welcome people of all ages to Frick Park in Pittsburgh, Pennsylvania. The world’s first environmental education facility that’s free, open to the public, municipally owned, and pursuing the Living Building Challenge, the Center is an unprecedented collaborative venture focused on the sustainable future of our environment. A dedicated and passionate group of individuals and organizations made the building a reality, bringing life, education, and nature back to this piece of Pittsburgh’s history. The project team included Pittsburgh Parks Conservancy, City of Pittsburgh, a design team led by Bohlin Cywinski Jackson, a construction team led by P.J. Dick Incorporated, and countless enthusiastic community members. 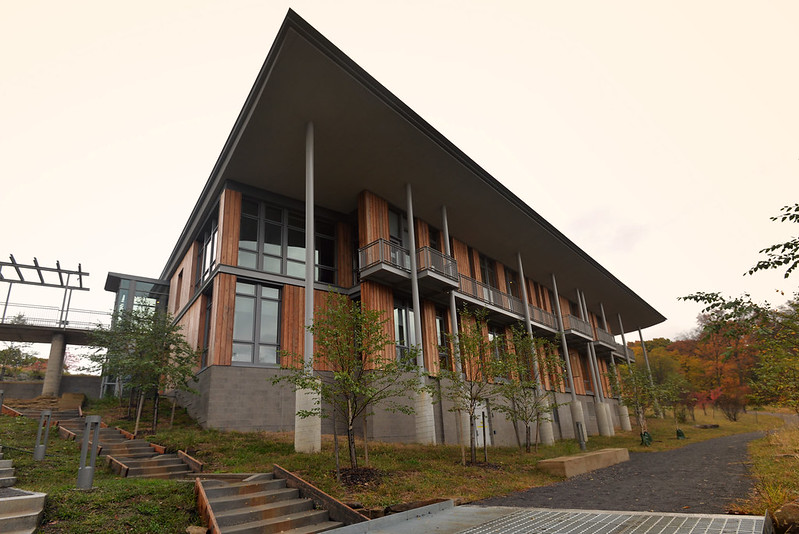 The story of Pittsburgh’s Frick Park begins in 1919, when industrialist Henry Clay Frick gifted 151 acres to the City of Pittsburgh to be used as parkland. The gift was at the behest of Henry Frick’s daughter Helen, who requested that a park be established where Pittsburgh children of all backgrounds could play and enjoy the outdoors. Frick Park officially opened to the public in 1927. Boasting 644 acres and stretching from the city’s Point Breeze neighborhood to the Monongahela River, the park today is a vast, largely undeveloped woodland reserve that teems with valleys, slopes, woodlands, flowers, and a diversity of wildlife, including joggers, cyclists, and nature enthusiasts from all around Pittsburgh.

In 1979, an Environmental Center was built in the park and, for the next two decades, the Parks Conservancy offered environmental education programs there for children from local schools, city residents, and visitors. It gave people a place to connect with and enjoy nature, while also learning how to care for and maintain it.

In 2002, the Environmental Center was severely damaged by fire and left abandoned. Without a building in which to host its programs, the Parks Conservancy used temporary trailers to continue providing education. Determined to continue the legacy of the Frick family, the Conservancy turned the loss of the Center into an opportunity to re-imagine their vision for environmental education, diversification, and community outreach. Out of this, the idea for a new Frick Environmental Center was born.

Education through Restoration and Aspiration

The Pittsburgh Parks Conservancy’s commitment to increase and diversify participation in hands-on environmental education by engaging the community brought new ideas and enthusiasm for a public environmental education facility. That vision has now become reality in the form of a new three-story, 15,600-square-foot Frick Environmental Center (FEC) building that promotes appreciation and protection of the environment in a functional and welcoming public space nestled off of Beechwood Boulevard.

“The new Frick Environmental Center embodies the best of Pittsburgh in both its respect for the past and its visionary design,” said Marijke Hecht, former director of education at Pittsburgh Parks Conservancy. “The practical aspects of the center will creatively serve as a diverse community, while its cutting-edge design is in step with our city’s place at the leading edge of the green building movement.”

Five years later, FEC is a living, breathing building that uses 40% less energy than a typical building of its size, captures and reuses rainwater, filters and treats all wastewater on-site (before releasing it naturally), and has on-site solar panels that offset 100% of its energy use. FEC is also constructed with regionally sourced materials that are free of harmful chemicals. As a whole, the building is designed and constructed to teach and inspire daily visitors to learn about and explore their environment, while providing an engaging, innovative, and tangible way to do so.

The new FEC is designed to emphasize and enhance visitors’ interactions with the environment by making many of its sustainable features actual interactive elements. Children and adults alike receive hands-on environmental education, fulfilling the Center’s role as a “living classroom” and helping visitors make the transition from neighborhood to nature.

Purposefully nestled in the hillside and tucked among the trees, with a simple sloped roof, the building itself literally and figuratively mirrors the nature that encompasses it. FEC’s south side mimics how trees grow in nature by having circular steel columns that are placed at irregular intervals. Clad in black locust siding, the Center showcases (back to the forest around it) a dense, robust wood that doesn’t need to be treated, stained, or sealed – and is native to the Eastern United States. Full-height wood windows emanate warmth and allow for expansive views of the park from the elevation of the tree canopy, providing visitors a unique perspective of nature.

The Conservancy’s vision for FEC and the desire to achieve LEED Platinum and Living Building Challenge certifications aligned well with the sustainable design philosophy of Bohlin Cywinski Jackson and PJ Dick. FEC’s Living Building Challenge pursuit reinforced to the entire project team their responsibility to and role in protecting and promoting public health and safety. It is clear that sustainable design is not only the right thing to do ethically, but also an opportunity to make a richer, more powerful, and evocative architecture. Sustainability, resiliency, and functionality are at the heart of truly beautiful buildings.

Circling Back and Looking Ahead

After a five-year collaborative design and construction process, FEC is once again a living, breathing classroom for Pittsburghers to visit, helping Frick Park remain a living testament to Helen Frick’s deep appreciation of nature and her love of Pittsburgh and its people.

Though building design and construction is now complete, FEC’s story is only beginning. As the landscape around it matures, the Center’s bright, new locust siding will weather to a beautiful silvery grey and Parks Conservancy education staff will settle into their new offices and begin acclimating to their Living Building.

FEC’s success as a certified Living Building is dependent on the staff’s sustainable behaviors of limiting waste and using energy and water sensibly, so the learning environment will require ongoing education for staff and visitors alike. Building utility and operations data will be tracked and tallied for a full year of occupancy. This effort will both confirm that the building functions as intended and ensure the Center can fully achieve its Living Building Challenge certification – an endeavor and success that will be long-celebrated by its creators, managers, educators, and visitors alike.

Continuing with the vision Helen Frick inspired many decades ago, Frick Park warmly welcomes its newest residents – staff and visitors to the newly rebuilt and re-imagined Frick Environmental Center – who will help ensure Frick Park thrives for many more decades to come.

Patricia is an associate at Bohlin Cywinski Jackson, an award-winning national architecture firm. As a detail-oriented thinker, Patricia is captivated by the process of building, and seeking innovative ways to express construction through design detailing. She leads the firms sustainability efforts, and is accredited in both LEED and WELL Building Standards.
View all posts by Patricia Culley →